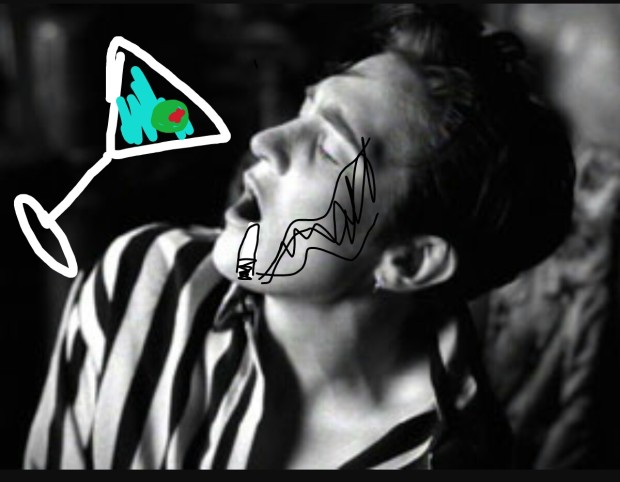 Oh, the nineties. After the fun, excessive decade of the 80’s which featured innovation stacked on top the also over the top decade of the seventies, things became more subdued. Men sang about their grungy emotions, stopped wearing make up, and women starting to take center stage as moody gravitas-bearing muses. Even some of them stopped wearing make up, too. It wasn’t all Cyndi Lauper and her party anthems anymore. No, this was the decade of serious women. And more black and white videos.

#52 “Constant Craving” by K.D. Lang. Released in 1992, and then again in 1993, this song became a major hit. Unexpectedly, K.D. won Best Female Pop Vocal and Best Female Video awards (Female Video? Videos have a gender? Don’t they mean Video by a Female?).

Whether you identify with it’s lyrics due to feelings you have towards someone you like, or perhaps a vice you can’t shake, and those may very well be the same thing, it’s not difficult to imagine why this song was so popular. We tend to crave the things that are bad for us, don’t we? Knowing we shouldn’t indulge only makes those cravings worse. And more constant.

The video features a stage production of “Waiting for Godot.” The themes (pick one, many have studied it and there are several) were meant to complement the themes of the song. Is K.D. craving the return of a currently absent yet soon to return Godot-esque figure? Maybe she is just craving a chance to play a role in a production that famously features only men. Regardless, having her sing backstage while we see the play performed mirrors how our deep longings continuously rack our minds behind the scenes, while we put on a mask to the world that we are just fine.

While I usually rag on the choice of so many 90’s videos to go black and white, the choice here provides a bleak and stark effect that magnifies the light and dark shades of emotion depicted in the song and video. The song deserved its acclaim, which makes it sad that we still don’t hear this song as often anymore, despite being featured on music-recycling powerhouse Glee.

I had a room mate for about a year who was also a very good friend of mine. She was in between relationships, and we both could have used a a year to share some costs and pay off some debts. I’m not sure how successful that part of the venture was, but we did spend a good amount of time together, which included many nights of living room karaoke via Youtube.  Among the songs she sang was one that I was vaguely familiar with, but became enamored with when she sang it. To this day I still curse her any time this song gets stuck in my head.

#57 “What A Good Boy” by Barenaked Ladies. Shocked I was when I discovered several months ago that this songs hails from way back in 1992 from the group’s album “Gordon”.  As big as they made it later with several hits like “One Week” and the theme song to TV’s wildly popular “Big Bang Theory”, poor little me was oblivious to music when I was a child and I never really knew how long the boys in Barenaked Ladies (none of them ladies, mind you) had been kicking it.

Their album “Gordon” was actually produced in part with monetary winnings from a local radio station in Canada. Now that is some good old fashioned enterprise.  Their style has always been on the eclectic side, and this song shows it.

“What A Good Boy” is a charming little ballad that showcases the funny group’s softer side. They still have their signature quickly sung verses and wordplay, but they keep things moderately paced and sweet with some stylish acoustics and the invitation to “be with me tonight” is hard to resist.

As far as the video is concerned, I’m not really sure what is going on. There are some shots and montages of a boy and some teen-aged kids doing some stuff, but I think those images are merely there to provide a minimum of context to what the song is about. Aside from looking younger, they look pretty much like they do later in the decade, and you could fool me into believing that this song is a more recent release. The highlights of the video are the band members with their various instruments and, for some odd reason, one of them dressed like a Mountie.

Oh yeah. They’re Canadian. I guess they just wanted to remind you.

Overall, it’s a melancholic song, a serenade from one lonely person to another, possibly in  dive bar somewhere. Maybe it’s about when times were better, like when we were children. Or maybe it’s like when my friend sang it in our living room, as an ode to old lovers who didn’t stay but you wish that they’d return for just one more night. It’s hard to poke fun at a song or even a group that pokes so much fun at everything, but this is a side of Barenaked Ladies that gives you an earnest glimpse into their tender and artsy qualities. Behind the humor and wit is some love. Or something.

Or maybe someone was just really depressed when he wrote this.

I went to an *ahem* urban middle school. I was a minority within a majority of minorities. I feel I’m better for the experience. I learned to mind my own business, stay out of fights, avoid gang association, and I learned some life-saving fashion advice: never wear a red and blue shirt in territory where Crips and Bloods are having a turf war. What I didn’t learn, however, is that Hip Hop has some white people involved, too. So like me, House of Pain is a minority within a majority of minorities.

#58 “Jump Around” by House of Pain. Not to be confused with “Jump” by Kriss Kross (like I’ve done), “Jump Around” became a hit in the US in ’92 before being re-released in the UK where it is still a club anthem. As famous as this single became, it is more infamous for it’s heavy use of sampling from a few different songs, and that terrible saxophone squeal at the beginning of every bar that could be used effectively to start a riot or to induce labor.

And that basically what the songs is about.

And guess what people do when they hear this. Go on. Guess. And now pat yourself on the back because, if you guessed anything else besides “jump”, you are probably like me and tried to stab your ears with the nearest anything just to stop the madness. Still, this song proves the decade’s uncanny ability to produce unforgettable tracks that live forever.

Aside from releasing such an annoying single, House of Pain is also well know for giving Everlast to the world. Later in the 90’s he went solo sans the rest of his household of pain, and did quite well, and you might not even believe he was a member of this group due to the musical range he explores.

Now that I have a headache, I leave you with the video that includes lyrics in case you forget the words. And if you don’t stir the slightest bit to even tap your foot or bounce your knee when the song begins, even despite yourself, then I’d advise you to check with your doctor.