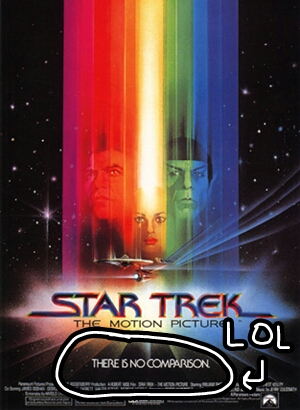 This film is one of the most maligned in the Star Trek franchise. Released in 1979, Star Trek: TMP was an attempt to revive the classic TV series that had gained a massive following through syndication since its cancellation in the 60’s. Through a turbulent development, it premiered as a bloated mess that fans had no choice but to try to love, and with the release of subsequent films has become a black sheep.

Gene Roddenberry had tried throughout the 70s to get his baby back on its feet. A stint as an animated series ensured that memory of the show didn’t wither away completely, and Star Trek was thus juggled between producers who wanted to make a movie or a new series.

1977’s Star Wars proved that sci fi films could make money, and Close Encounters of the Third Kind confirmed that sci fi could be something other than Star Wars and still succeed. So all plans made for a new series, Star Trek: Phase II, were scrapped and rolled into the new film, and some of those scraps eventually took root in Star Trek: The Next Generation (which at this point wasn’t even a preconceived notion yet).

Star Trek: TMP got a huge budget, and everything got a lush treatment, but unfortunately having so many egotistical cooks in the kitchen, as it were, led to so many paralyzing creative differences that the film’s focus was hamstrung and the result was an over-indulgent mess.

You can’t blame them, to an extent. At this point, Star Trek was dead, and having a chance to resurrect it was a rare gift. Why not go all out?

On a positive note, the film has some gorgeous special effects. The soundtrack is also sweeping in an old fashioned way (the opening fanfare was later used as Star Trek: TNG’s opening). The problem is that so much time is spent showcasing these assets that it becomes obvious that the plot is thin. Who wants to sit through an overture without even any credits to read, and those minutes and minutes of flybys of the Enterprise’s exterior?

Speaking of the plot, it’s not terrible. A strange cosmic invader that threatens Earth may seem cliche, but seeing the Enterprise crew using their wits to explore this thing and find a way to save humanity is essentially Star Trek. The main problem with the plot is its presentation. The story is convoluted and fragmented, and extended scenes of space travel and ironically boring “ooh ah” moments spoil the fun.

But there is some fun, occasionally. At the film’s start, we see a brand new iteration of Klingons, the ones we know to this day. Unfortunately, the concept was still coming together and these Klingons seemed excessively stupid, and the make up still needed work. You get the impression that these Klingons are inbred and suffer from congenital mental handicaps.

Another fun scene is when the bridge is invaded by a probe in the form of plasma. It meanders around while the petrified crew helplessly watches, except for Spock. He attempts to prevent the probe from gathering data, and even tries to save the bald Deltan beauty Illia from “assimilation”.

A failed transporter beam frighteningly shows that not all deaths in space are pretty.  This is a surprisingly dark scene in an otherwise celebratory film. This scene stuck with me throughout my childhood.

Unfortunately, several other plot threads just fray the film’s focus. Kirk’s unfamiliarity with new technology, Riker-esque Commander Decker’s unrequited love for Illia, and McCoy’s distrust of Spock’s hyper-logical motives exhaustingly cannibalize screen time so that when the actually interesting twist that the invader is an Earth probe returning home is revealed, you just wish it was all over, already.

There is nothing sleek or space worthy about this film. It is opulent, and crowded with “all the things” that people had been working on since the original series ended. It’s a shame that it was so poorly executed, because this movie does have some interesting elements.

Commonly this film is compared to Star Trek V, another miserable Star Trek film. The debate rages on as to which one is worse, but it’s safe to say that if you’re wanting a taste of Star Trek movie goodness, then skip this one and start with Star Trek II: The Wrath of Khan.

It’s interesting that the start of Star Trek’s film franchise echoes the beginning of the original series. Both had an initial installment, or pilot, that just didn’t please, but the second installment became a success. Perhaps something as grand as Star Trek needs a couple of tries to get things right.

The Outcast is one of Star Trek’s most controversial episodes. While it certainly isn’t the only one to address gender and sexuality, it is one that attempted to directly address the issue of homosexuality, something long promised since Star Trek: The Next Generation’s inception.

The episode follows Riker and his collaboration with Soren, member of an androgynous race, to rescue missing scientists. Soren’s curiosity about humanity leads to her discreet revelation that she, unlike most of her kind, has a sense of gender, female, and is attracted to males, to Riker.

The romance is treated tenderly, unlike space player Riker’s other cosmic hook ups. He even consults ex-girlfriend Troi about this and receives her blessing. Ultimately, Soren is discovered by her people, and after a brief trial is sentenced to a high tech lobotomy to remove her “unnatural” sense of gender so she can be “cured”.

Tragically, Riker’s attempt to rescue her is too late and we see what happens to a society that is free to enforce its oppression.

It doesn’t sound very gay, does it?

But hold on… Star Trek has always worked best as allegory. While it has been mentioned that the producers of the show evaded homosexuality with this story, giving it a veiled showcase, the episode’s more allegorical nature has actually allowed it to transcend the “gay issue” into a much more inclusive one.

Before Soren’s “deviance” is revealed, she spends time inquiring the Enterprise crew about gender roles. While the obvious physical differences are mentioned, Soren learns that treatment of gender in other ways is fair and equal. To her, the Enterprise’s happy coexistence of gender and equality is foreign but hopeful.  Many in our world may feel just as shocked as Soren is, considering still lingering inequalities between the genders in even our most progressive societies.

Soren tells Riker her secret in the privacy of a shuttle, where she is met with his understanding. Her description of a life of fear, and secrets, and hiding from persecution is all too familiar to anyone who is gay, or a racial minority, or even transgender as Soren most certainly is. When I watched Soren divulge her attraction to “maleness”, instantly I identified with her and I saw the terror and strength in her admission.

Soren’s true strength comes through when she speaks in her own defense on her home world. She proclaims her sense of gender is natural, and that all she wants is access to the same things as the rest of her kind, freedom to live with a compatible partner to share in life’s joys and support each other during its troubles.

Her rhetoric is common nowadays, with marriage equality being such a hot topic in our world. Think about twenty years ago, though. Gay people were merely struggling to be recognized as something more than the punchline of a joke, the victim of a “gay disease” that is actually a threat to us all, or as some secret to be swept out of sight and out of mind.

Marriage equality in the 90’s was as foreign to us as gender equality (or recognition, even) was for Soren.

With gender and sexuality being so intertwined, and able to be included in the entire spectrum of LGBT rights, the issues covered by this episode are now more relevant than ever.

Certainly, I was not the only child affected by this episode, who shared in Soren’s terror of the rest of her kind because of a secret truth that we couldn’t safely share. Being able to see a story that put a face to our fear gave us hope that there would be other Rikers out there to understand and love us.

The ending is tragic, yes, but it provides a staunch warning to the rest of our world.